View cart “The 10 Minute Bible Journey” has been added to your cart.
Sale!

Published by the Institute for Creation Research (ICR), this book set addresses geology and climate change from a Biblical Worldview. An amazing $60.00 retail value for only $9.45!

Radioisotopes and the Age of the Earth

But, have been mislead about the reliability of radioactive dating methods? The RATE group believes we have. The RATE group, consisting of six young-earth creationist geologists, geochemists, and physicists, is cooperating to research the issue of Radioisotopes and the Age of the Earth. They have dared to to ask the tough questions and are searching for an alternative explanation for the billions of years found in rocks. They are asking questions like:

These and many other questions are addressed in this book. The RATE scientists are working to salve the radioactive riddle. this book “sets the stage” for their five-year research initiative on Radioisotopes and the Age of the Earth. A second book is scheduled for the end of the research phase on 2005 to report on their findings.

For 40 years, the Institute for Creation Research has equipped teachers with evidence of the accuracy and authority of Scripture. In keeping with this mission, ICR presents Science Education Essential, a series of science teachings supplements that exemplifies what ICR does best – providing solid answers for tough questions teachers face about science and origins.

This series promotes a biblical worldview by presenting conceptual knowledge and comprehension of the science that supports creation. The supplements help approach the content and Bible with ease and with the authority needed to help their students build a defense for Genesis 1-11.

What geologic processes shaped your earth? Is evolution right, that it developed gradually over millions of years? Or does the geologic record demonstrate something else?

Geologic Processes, the fifth in the series, studies earth’s history to answer the questions:

The world is a museum of past processes that operated on a much greater scale, proceeded at a more rapid rate, and acted with more intensity than those acting today. The best explanation for the earth’s history is the biblical record of creation and the great Flood.

Fourteen writers lead you on a tour of the Grand Canyon in this first distinctly creationist field guidebook to the geology, biology and human history of the world’s greatest natural wonder. The book is well illustrated with many color photographs.

Eminent geologist Dr. Steven Austin explains from a biblical standpoint how the Grand Canyon was formed. This book contains a wealth of information about geology and biology that equips Christians to defend Genesis, the young earth position, the worldwide Flood, etc. Also includes material on the eruption of Mount St. Helens.

Climates Before and After the Genesis Flood: Numerical Models and Their Implications

The Bible speaks of rain upon the earth for forty days and forty nights in the days of Noah. It says that the fountains of the great deep were broken up, the windows of heaven were opened, that a flood covered the earth, and that the waters covered all the high hills under the whole heaven. However, the Bible leaves silent a detailed discussion of the source of the waters for the flood and other events which were likely associated with such a devastating event. How much water came from the “fountains of the deep”? How much came from the “windows of heaven”? The Bible talks only briefly of mountains forming, oceans deepening, and the climate changing. Nowhere does it deal with many of the evidences of past catastrophic processes evident today. Is it possible to fill in the sketchy descriptions of the Biblical flood events with scientific observations and numerical modeling? This monograph is an attempt to apply conventional scientific methods and data to a Biblical framework of Earth history. The proper term for this attempt might be Biblical paleoclimatology. The following topics are treated in this monograph: 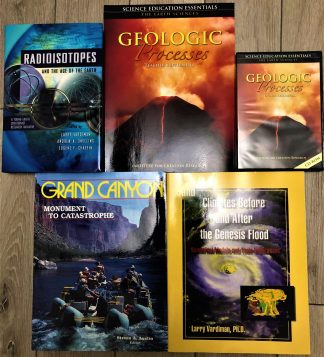