Christian Encounters, a series of biographies from Thomas Nelson Publishers, highlights important lives from all ages and areas of the Church. Some are familiar faces. Others are unexpected guests. But all, through their relationships, struggles, prayers, and desires, uniquely illuminate our shared experience. 6 book bundle.

Christian Encounters, a series of biographies from Thomas Nelson Publishers, highlights important lives from all ages and areas of the Church. Some are familiar faces. Others are unexpected guests. But all, through their relationships, struggles, prayers, and desires, uniquely illuminate our shared experience.

John Bunyan
John Bunyan wrote one of the greatest classics in English and Christian literature; yet he was born the son of a tinker, went to school only for a few years, and had his apprenticeship to take care of. Part of the “Christian Encounters” series, short chapters will show the influences upon Bunyan’s life and faith, as well as the external circumstances of the times he lived in. 169 pages, softcover.

Winston Churchill
his biography from the Christian Encounters series will introduce you to the life of Winston Churchill. From his somewhat unpromising childhood to his leadership during WWII, you’ll meet the great soldier, statesman, and wit who became one of the most influential men of the 20th century. 166 pages, softcover.

Saint Patrick
At age 14, he was captured from his homeland of Scotland by Irish marauders and taken as a slave to Ireland, where he lived for six years tending his master’s flocks. In his early twenties, he fled over 200 miles and escaped by ship, returning to his family. By the eighth century, he had come to be revered as the patron saint of Ireland. What did he experience during his years of slavery that proved invaluable to this man who became a revered missionary who “baptized thousands of people,” converted sons of kings, and led wealthy women to become nuns? Learn about the sustaining faith of St. Patrick in this Christian Encounters biography. 192 pages, softcover.

GALILEO – HERO OR HERETIC? GENIUS OR BLASPHEMER?
It’s no mystery how profound a role Galileo played in the Scientific Revolution. Less explored is the Italian innovator’s sincere, guiding faith in God. In this exhaustively researched biography that reads like a page-turning novel, Mitch Stokes draws on his expertise in philosophy, logic, math, and science to attune modern ears with Galileo’s controversial genius. Emerging from the same Florentine milieu that produced Dante, da Vinci, Machiavelli, Michelangelo, Amerigo Vespuci, Galileo questioned with a persistence that spurred his world toward an unabating era of discovery. Stokes confronts the myth that Galileo’s stance on heliocentricity stood astride a church vs. science divide and explores his calculations for the dimensions of Dante’s hell, his understanding of motion, and his invention of the pendulum clock. To read this volume is to journey through Galileo’s remarkable life: from his inquisitive childhood to his dying days, when, although blind and decrepit, he soldiered on, dictating mathematical thoughts and mentoring young proteges.

Johann Sebastian Bach
Two-and-a-half centuries after his death, the complex life of composer Johann Sebastian Bach continues to fascinate. Bach’s colorful life was anchored in his belief that “music has been ordered by God’s Spirit”?so much so that he began each composition by scrawling Jesu, juva (Jesus, help me) at the top of a blank page and concluded each with S.D.G. (short for Soli Deo Gloria, to God alone be the glory). Through the eyes of noted music and culture writer Rick Marschall, the intensely personal yet boldly public faith that earned Bach the nickname “The Fifth Evangelist” takes on fresh meaning. From a survey of Bach’s family and its deep Christian roots to a behind-the-scenes look at how he crafted his masterpieces, this book paints a picture of an astonishing figure and his relationship with his God. Marschall brings Bach’s enduring music and influence to the postmodern world and to all who would draw inspiration from his relentless pursuit of divinely ordained creativity.

Anne Bradstreet
When she arrived in the New World at eighteen, Anne Bradstreet was a reluctant passenger: her old, comfortable lifestyle in England was quickly dashed against the rocks of the Massachusetts Bay. While the wilderness of America and the drama of establishing the Massachusetts Bay Colony at times overwhelmed her, she always took refuge in the belief that it was God’s plan. Anne respected the Puritan teachings and followed them her entire life, always searching for God’s hand in everything around her. But she also was inspired by a strong female leader of the day, Queen Elizabeth, and this influence taught Anne to push herself beyond the day’s limitations. She managed her home, educated her children, encouraged her husband, and sought her Lord—all with a poet’s heart. 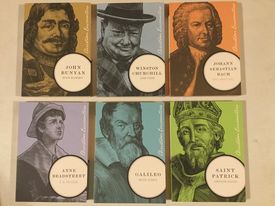